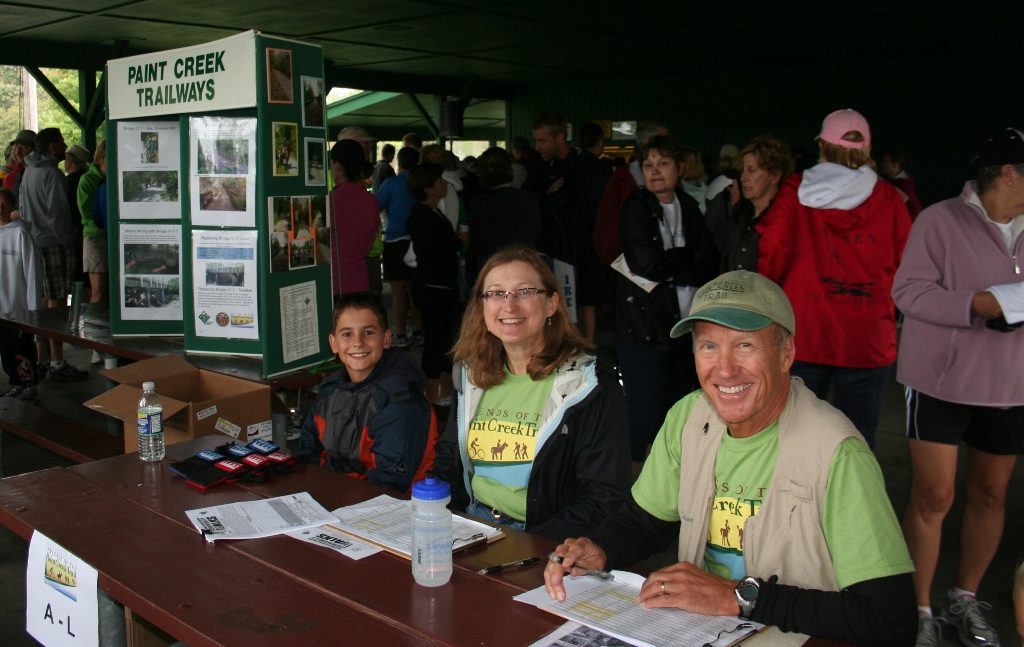 The Friends meet at least quarterly at the Paint Creek Cider Mill in the meeting room on the main floor at 6:30 PM, unless otherwise noted (Or by Web).  All meetings are open to the public.  We’re a fun, easy-going group.  Join us!

Here is a FLYER about the organization and a MEMBERSHIP APPLICATION to send in or bring to the next meeting:

Send by mail or take a picture and send it via email to paintcreektrailfriends@yahoo.com

The Friends of the Paint Creek Trail is a 501 (c)(3) non-profit organization created to give Trail users the opportunity to help plan for the future of the Trail, and to assist with its environmental stewardship. Our mission is to promote the usage, maintenance, improvement, and enjoyment of the Trail.

Working with the Paint Creek Trailways Commission and Trail Management, we have organized trail rides, walks, and Trails Day events. We also created and maintain the Moutrie Pollinator Garden alongside the Trail in Rochester Hills.

The Friends design, produce and sell a variety of Trail-branded merchandise such as hats, hoodies, and T-shirts.

Members serve as Trail ambassadors. They participate in quarterly meetings where they provide input on Trail management, and suggest, plan and volunteer to help with fun events. Meetings are generally held in person at the Paint Creek Cider Mill or via web conferencing.

Membership is free. However, donations are appreciated and increase the effectiveness of our activities. All donations are tax-deductible-eligible. The Friends group has an elected Board of Directors and Officers.

Even though the Paint Creek Trail is Michigan’s oldest non-motorized rail-trail, the occasional face-lifts and renovations keep it looking as young as ever. Established in 1983, the crushed-limestone trail runs for 8.9 miles between Rochester and Lake Orion through a mostly wooded corridor alongside Paint Creek. It is also part of the developing 2,000-plus-mile Iron Belle Trail, comprising separate routes for hiking and biking from Detroit to Ironwood in the Upper Peninsula.

The trail’s many charms include a variety of wildlife, historical sites, rest stops, and a trout-filled creek that the route crosses 12 times. Maps and announcements are posted at the trailheads, where you can also pick up folding maps. Mileage markers, left over from the days when this path was a railway, announce the distance to Detroit. Free bike fix-it stations are installed at the Rochester Park Path to the Trail, at the Tienken Road Crossing, adjacent to the Cider Mill at Goodison,  and in Lake Orion near Oat Soda and Cookies and Cream.

The trail follows a former segment of the Detroit and Bay City Railroad that launched service in 1872. The Michigan Central and the New York Central Railroads became subsequent operators, running trains between Detroit and Mackinaw City, and the Penn Central took over in 1968. Emerging from bankruptcy, the railroad in 1983 sold the rail bed to a commission comprised of trail advocates and local communities. The commission surfaced the 8-foot-wide trail with crushed limestone, rather than asphalt, in the early 1990s to maintain a rural experience.

Beginning at Lake Orion, you’ll follow a barely perceptible downhill slope to Rochester. Lake Orion originally grew up around a sawmill built in 1825 but later became a resort destination. Two miles south, a historical marker notes the site of the water-powered Carpenter Rudd Mill that stood here until 1926. This is also where you can connect to the Bald Mountain State Recreation Area for fishing, swimming, and mountain biking.

For the next couple of miles, Paint Creek meanders alongside and crosses the trail, presenting many opportunities for fishing. If you want to try your hand with a bow and arrow, there’s an archery range at mile 2.5. Use caution to cross at busy Adams Road in 0.5 mile.

You’ll pass some open prairie and woods before you reach the Gallagher Road trailhead at mile 5. A short side trip leads to good eats in Goodison—home of the Paint Creek Trailways Commission—at the Paint Creek Cider Mill and Goodison Cider Mill. Just before arriving at the Silver Bell Road trailhead in 0.6 mile, you’ll pass the Paint Creek Heritage Area–Wet Prairie on the right, where land managers perform spot burning to remove invasive plants and restore a prairie.

As you enter the suburban sprawl of Rochester Hills (horseback riding is prohibited south of here) after crossing Tienken Road at mile 7.8, you’ll pass several trail entrances to the 16-acre Dinosaur Hill Nature Preserve, which has nature paths and a visitor center. The trail ends in about a half mile at Rochester Municipal Park, where you’ll find parking, restrooms, and drinking water, as well as the annual Art & Apples Festival in September.

The Paint Creek Trail seamlessly joins the Rochester River Walk at the park. The river walk follows Paint Creek for another 0.8 mile through Rochester to a junction with the Clinton River Trail, which joins the Macomb Orchard Trail 2 miles to the east.

We host our quarterly meetings in the meeting space at the Paint Creek Cider Mill, 4480 Orion Road, Rochester, MI  48306.

Friends of the Paint Creek Trail